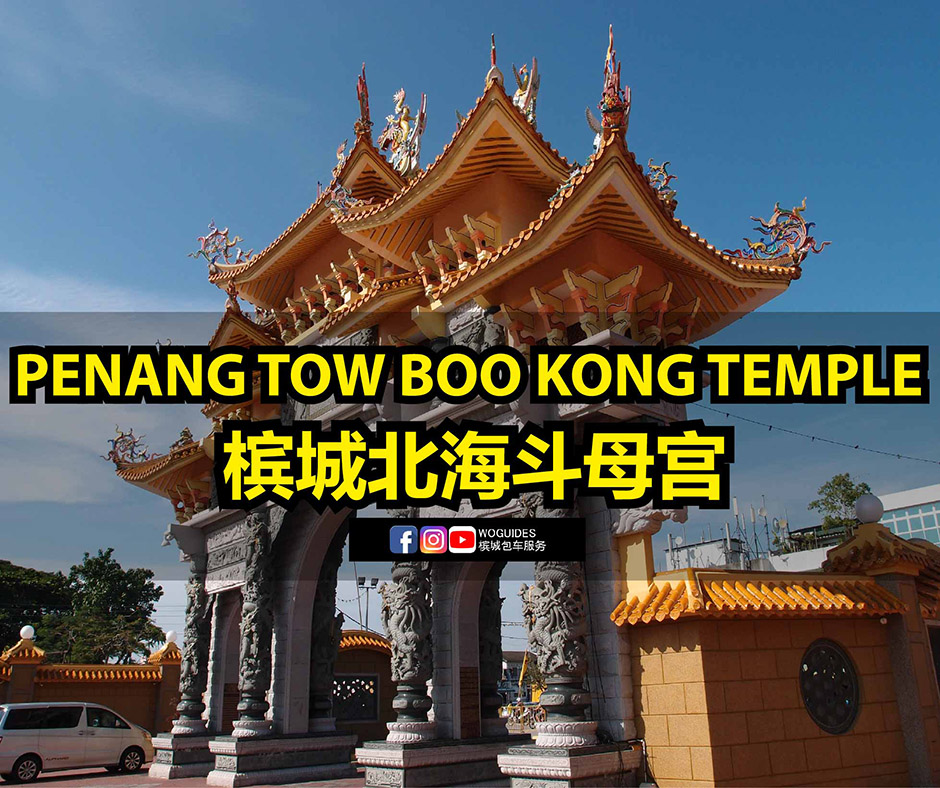 Tow Boo Kong Temple Butterworth built in 1971 and one of the biggest in Butterworth, the temples is dedicated to the worship of the Nine Emperor Gods. On the 9th Month of the Chinese Lunar Calendar, the Nine Emperor Gods Festival will be held for duration of 9 days. During the festival, rituals such as skewering of a 9am spear between the mouth and fire walking will be carried out.

The Nine Emperor Gods Festival is a nine-day Taoist celebration beginning on the eve of 9th lunar month of the Chinese calendar, nine-emperor-gods-festival-celebrated-with-primarily in Southeast Asian countries such as Myanmar, Malaysia, Thailand and Indonesia by the local Chinese communities.

On the eve of the ninth moon, temples of the deities hold a ceremony to invoke and welcome the nine emperors. Since the arrival of the gods is believed to be through the waterways, processions are held from temples to the sea shore or river to symbolize this belief. Devotees dressed in traditional white, carrying incense and candles, await the arrival of their excellencies.

A carnival-like atmosphere pervades the temple throughout the nine-day festival. During this period of time, the constant tinkling of a prayer bell and chants from the temple priests are heard. Most devotees stay at the temple, eat vegetarian meals and recite continuous chanting of prayer. It is believed that there will be rain throughout the nine days of celebration.

The ninth day of the festival is its climax. A procession which draws scores of devotees sends the deities back home.

The Nine Emperor Gods Jiǔ Huáng Xīng Jūn / Jiǔ Huáng Da Di are the nine sons manifested by Father Emperor Zhou Yu Dou Fu Yuan Jun and Mother of the Big Dipper Dou Mu Yuan Jun who holds the Registrar of Life and Death. The worship of Dou Fu Yuan Jun has declined strongly as proper teachings of Taoism degenerate since being exported out of China. Today, most Nine Emperor God temples do not acknowledge the existence of Dou Fu Yuan Jun. However, Dou Fu Yuan Jun is invoked alongside Dou Mu Yuan Jun in Great Dipper Honouring known as Li Dou ceremonies. According To Priest Long Hua, the 35th Generation Leader of Long Shan Men Taoist Sect (Singapore), honouring the Northern Dipper stars prolongs one’s life, eliminate calamities, and absolves sins and past debts of oneself and his family.Wu, Jave (2007), The term Ye as in Jiu Huang Ye ( loosely translates as “Grandfather”, a title worshipers commonly use to bring a more intimate relationship between themselves and the Nine Emperors. The Nine Emperor Gods should not be mixed up with the Wang Ye or Princes of the Ming rebels. Popular folk culture has it that the Nine Emperor Gods are actually sea pirates of the Ming dynasty that plotted to overthrow the Qing dynasty. According to Priest Long Hua, this information is inaccurate and considered derogatory to the actual teachings of Taoism as the Nine Emperor Gods are actually high-ranking Star Lords who preside over the movement of planets and coordinate mortal Life and Death issues.Wu, Jave (2008), Celebration The Nine Emperors is formed by the seven stars of the Big Dipper of the North Ursa Major (visible) and two assistant stars (invisible to most people). The Nine Emperor Stars are: